SINCE THE SAD demise in 2016 of a remarkable number of celebrities, I have been gradually collating images of famous faces in order to create a collection of oil painting portraits.

These paintings will appear here, over time, and include such luminaries as Alan Rickman, David Bowie, Debbie Reynolds, George Michael, Prince and Muhammed Ali. There are plenty more who qualify for the unenviable group of #RIP2016, including Victoria Wood, Gene Wilder and Carrie Fisher.

One of the first that I started painting was the Canadian singer/songwriter/poet Leonard Cohen who has always been a personal favourite of mine. I saw him perform twice: once in 1979 at the Hammersmith Odeon, when we managed to sit in the front row which made it seem a very intimate affair and the last time at one of his sellout, comeback stadium tours at the O2 Arena in 2008. While still astounding, that one didn’t have the same feeling as the 1979 performance.

The first attempted oil painting was half the size of the current one in progress, which you can see in the photo. As with all the others, I am trying to concentrate on extreme close-ups of the facial features (the David Bowie painting shows just his eyes) and wonder if this intensifies the feeling that these giants of the modern world may be gone but will never be forgotten.

My return to my first love of painting coincides with receiving commissions. Although I went into caricatures and cartoons to earn a living, I’ve always had painting at the back of my mind.  I have just completed an oil painting for a music promoter and hope to receive many more. If you are interested in commissioning a painting of any subject matter (involving people) or portraits, please contact me in the form below. I look forward to hearing from you. 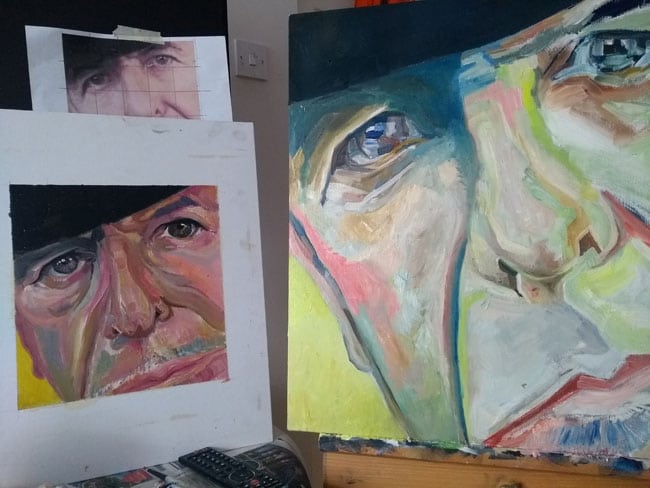