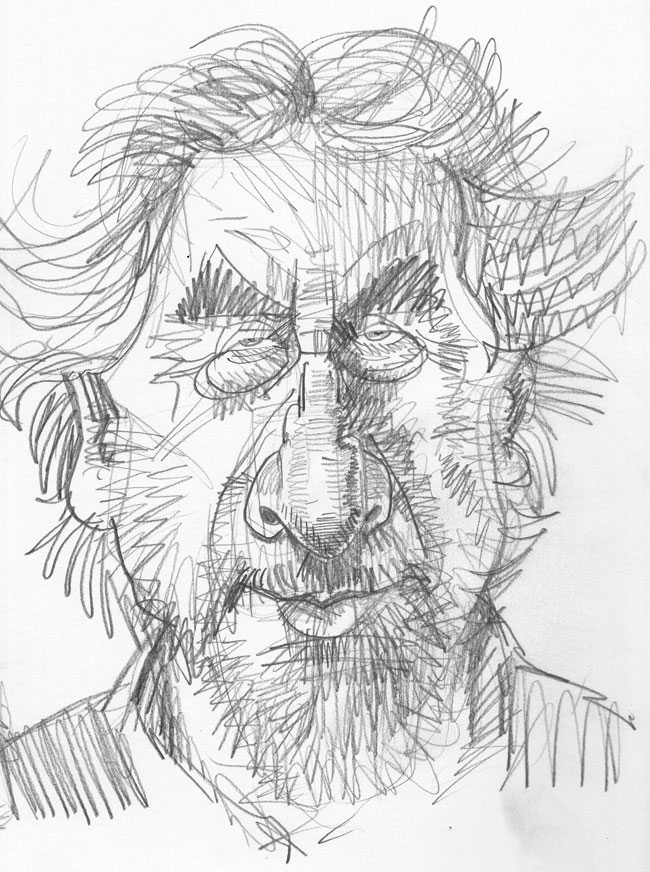 HOW DID I come to draw this pencil sketch of Howard Jacobson? While the TV is on in the evenings, I am invariably scribbling in a sketchbook, particularly when the programme on show is on more for other family members rather than me. Often, I scan the news to see which characters are prominent but often, these days, it’s Donald Trump, Vladimir Putin and Boris Johnson – again! I scour my memory for unforgettable faces and am often surprised at how bland some faces really are – at least in the offerings supplied by Google Images. So, while the family watched The Durrells the other night, I looked up Keeley Hawes (who had been distinctly memorable in Line of Duty, but is something completely different here, both in looks and personality). Any caricaturist will tell you that they need some definite features to hook onto. I could have probably drawn Keeley Hawes in her Lindsey Denton role, as she’s a little more scrubbed down than her other more glamorous roles.

It’s strange how the sub-conscious works. The night before I was, predictably churning out another Vladimir Putin caricature when I suddenly thought of Hoss from the old TV show Bonanza. Who knows why that happened? I haven’t finished that one, but I will revisit Dan Blocker’s unforgettable chubby visage one of these days.

So, from Keeley Hawes, the old subconscious made a similar totally unintelligible leap to UK novelist and journalist Howard Jacobson. There was no such problem in finding ‘just the right photo’ to work from with Jacobson. He looks great for any caricaturist in all his photos. And, voilà! Half an hour later, the pencil sketch of Howard Jacobson that you see above appeared. I have been reliably informed by a caricaturing colleague that his wife collects drawings of her husband. So, Jenny de Yong, if you’re reading this, let’s talk!