CARICATURES OF POLITICIANS are usually a mainstay for most cartoonists. The people who put themselves in charge of our lives all around the world are prominently displayed in all the media and the situations they get into make for avidly consumed material in most newspapers, magazines, online and on television. 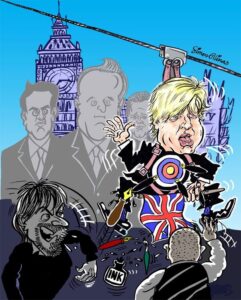 Above, you can see jean-Claude Juncker, President of the European Commission, as published in WProst Magazine. And, on the right we have that perennial favourite the United Kingdom Foreign Secretary Boris Johnson as depicted being targeted by ‘satirists’ for Total Politics Magazine.

Of course, the dwindling cartoon market in this country means that there a fewer political cartoonists actually being published but this doesn’t stop the dedicated ‘humour professional’ being inspired by the daily news. I have lost count of the number of cartoons I have drawn of Boris Johnson or Donald Trump, both of whom are the gifts that keep giving for caricaturists the world over. 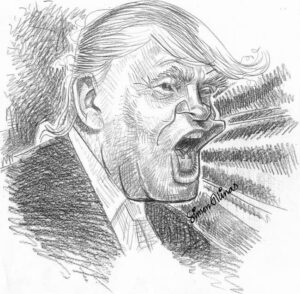 Working in pencil is often a good way to start any caricature (as opposed to going straight in with ink which is also a favourite of mine) and I have built up quite a few pencil sketches of politicians and other famous people which you can see HERE.

One of the great advantages of the internet is Google’s vast repository of images. Whereas, in the old days (I started out in the early Eighties) I would sometimes find myself travelling down to Fleet Street to borrow photos from a photo library or spend hours scouring through magazines and newspapers for just the right pic of a certain politican, nowadays Google Images IS your own photo library. 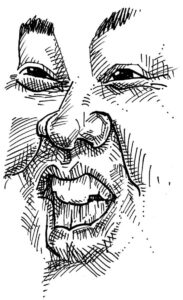 Pen and ink is the most traditional technique used by cartoonists and I have recently become interested in drawing caricatures in cross-hatching style really close-up to the main features of the face, to see if the likeness of the politician is retained. This one is of North Korea dictator Kim Jong-Un, another personality who is sadly hogging the headlines for all the wrong reasons.

Let me know if you think any of this style of illustration could be useful to you and your business, perhaps in websites, magazines or other publications. Simply contact me HERE