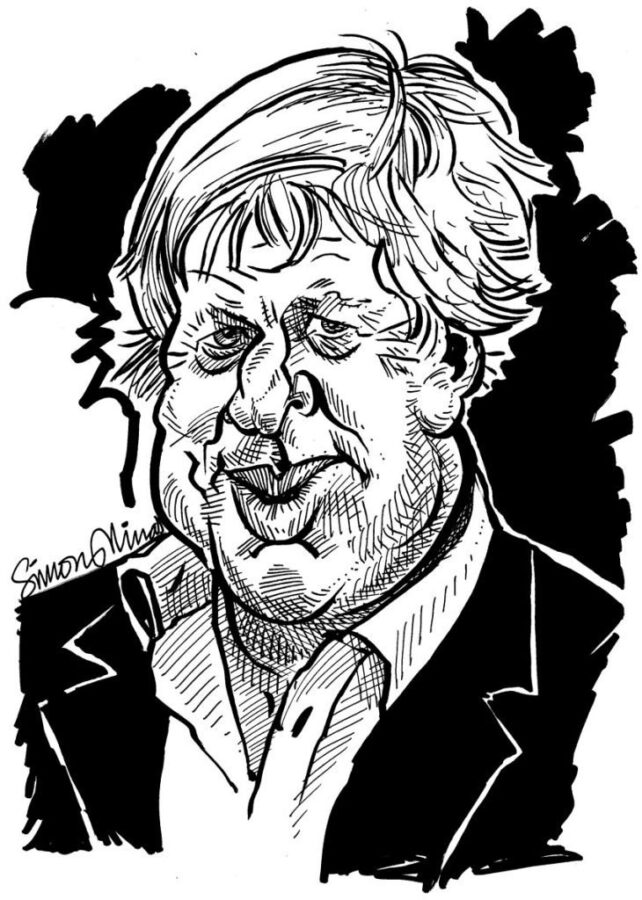 AS THE SOPORIFIC proceedings of the Conservative Party Conference continue, I decided to draw yet another caricature of Boris Johnson to add to my collection. If anyone is guaranteed to bring some life to the event, it’ll be him, whether you love or hate him. Someone with the chutzpah to choose to be photographed jogging in outlandish outfits is either going to be the country’s saviour or its biggest disaster. But certainly not lack lustre like Theresa May. 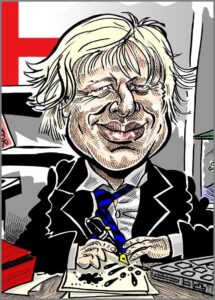 On the left, you can see an earlier colour version drawn while he was London Mayor and had longer hair. Boris Johnson certainly has a collection of visual traits valuable to a caricaturist although his virtually white eyebrows and eyelashes can be tricky to pin down with black ink. (You have to use crucially-positioned spaces!)

Boris Johnson was born Alexander Boris de Pfeffel Johnson. With his exotic parentage and ancestors, he has described himself as a “one-man melting pot” – with a combination of Muslims, Jews, and Christians as great-grandparents. He took the well-trodden upper-middle class path from Eton and Oxford through to journalism and, currently, politics. His alleged ambition is well-known and he is, at this very moment, ruffling feathers within Westminster and at the Conservative Party Conference in Manchester with apparent Machiavellian manoeuvrings and publicity stunts.

Total Politics magazine commissioned another caricature, right, of Boris Johnson, centering on his infamous zipwire mishap during the 2012 Olympics. The topic was politicians being a target for satirists with Boris Johnson at the forefront. 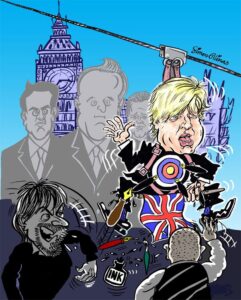 Apparently, it’s something called ‘Inktober’ on Facebook and other social media platforms during which we are encouraged to upload ink drawings. Seems a bit like a Busman’s Holiday to me, as I am doing this most days of the year anyway. But, this caricature of Boris Johnson can be considered to be my contribution to the festivities.