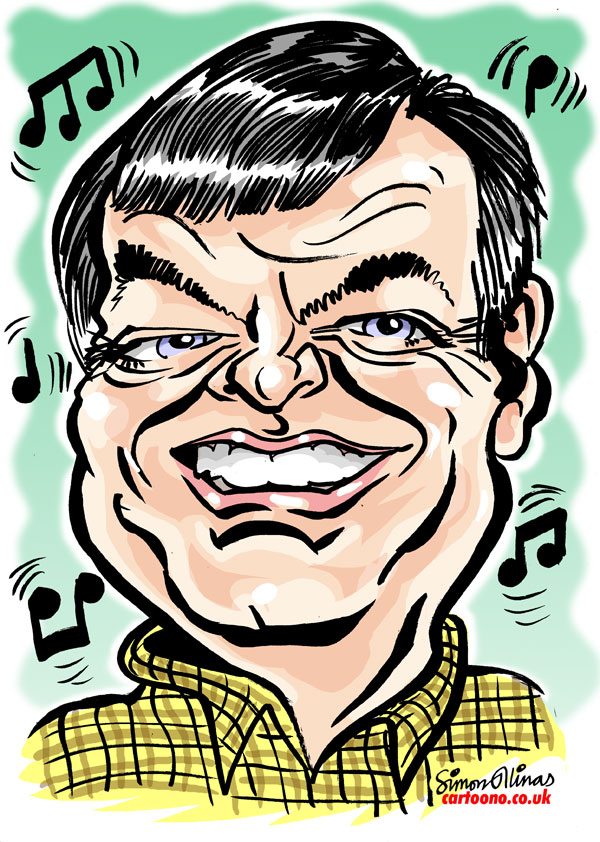 THIS WEEKEND SEES the fiftieth anniversary of BBC Radio One. This was the station introduced in response to the illegal pirate radio stations around in those days such as Radio Caroline and Radio London which were the only purveyors of current pop music. 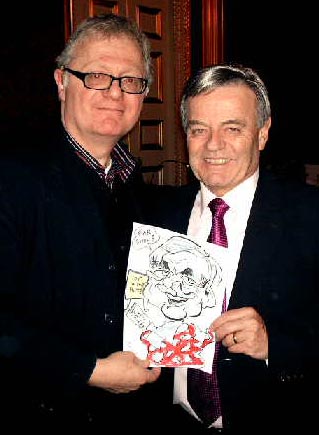 The first disc jockey to play a track on Radio One was the ever popular Tony Blackburn. You can see a caricature of him above. On the left you can see him delighted to receive an on-the-spot caricature at the annual Not Forgotten Association Christmas party.

My memories of BBC Radio One

My own memories of Radio One are that it instantly became very popular with my (older) brother and probably inspired him to become a disc jockey himself, running a mobile disco and, eventually hosting his own programmes at JazzFM.

I am delighted to say that Tony Blackburn is a neighbour. We often bump into eachother in restaurants in Barnet (he lives up the more expensive end known as Arkley). Most years we both volunteer our services to the Not Forgotten Association at their annual Christmas party in St James’ Palace. He’ll be chatting and joking with the guests, many of them disabled ex-servicemen, while I, along with others, draw quick caricatures.

The caricature you can see above was originally drawn to accompany some tweets that we exchanged in a book I was planning based on caricatures of tweeting celebrities. It’s the same sort of caricature as an “Emailed Caricature Colour” the details of which you can see at Gift Caricatures.

Having posted this caricature on Facebook, I was surprised to see it garner 49 ‘likes’ and a number of approving comments. I had produced this one quite quickly and it is more popular than some of my much more considered works!