TENNIS STAR Serena Williams has been making headlines recently and not entirely because of her defeat at the US Open. There has been a global furore surrounding a cartoon of her having a tantrum at losing the match. The critics complain that the cartoon caricatures Serena Williams in the same way as black people were caricatured back in the 19th century and that this (cartoon) was an intentional racist comment.

Personally, I can’t see it that way as it simply a cartoon illustrating a black sportswoman being a bad loser. There was, perhaps, something about the unflattering ‘angry face’ of Serena Williams in the cartoon which riled most complainants and many pointed out the unflattering physique in the cartoon. I wonder if they have actually SEEN her? An impressive build for a man, let alone a woman.

There is a worrying socio-political culture growing at the moment which sees sins/crimes where there are none, if they don’t concur with their rule book of political correctness. The irony of it is that they call hapless perpetrators of these deeds as ‘bigots’ even they are being even more bigoted from the other side of their imaginary fence. 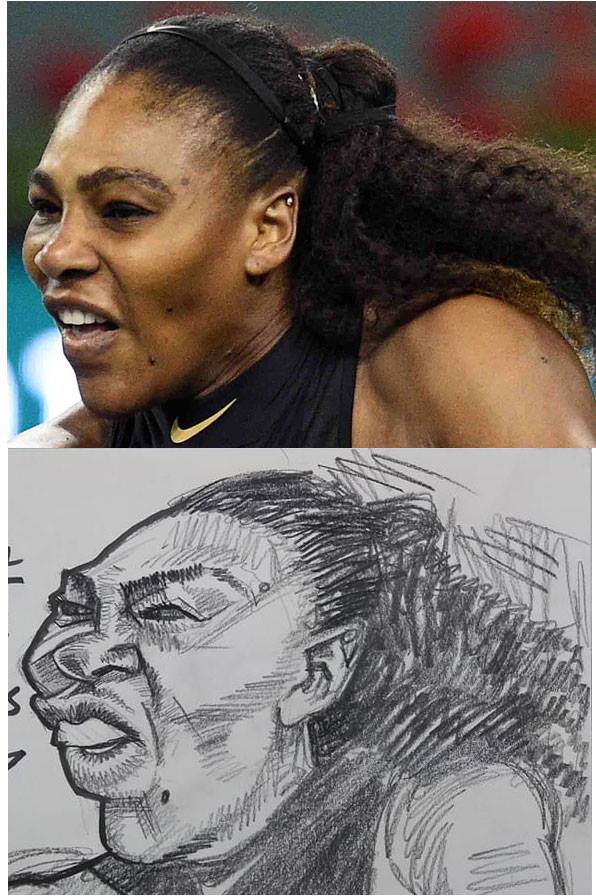 I decided to try to draw an accurate caricature of Serena Williams in full exertion mode. You can see the result above. Caricatures are not meant to be particularly flattering and the Australian cartoon which caused all the fuss was simply illustrating a news story (albeit with the generic opponent, rather than Naomi Osaka).

As a caricaturist, I try to please my clients, obviously, but I don’t believe the Australian cartoonist intended to cause the tidal wave of offence that his cartoon caused.

2 thoughts on “Caricatures of Serena Williams”